36' Maine houseboat from a Devlin kit

Malone Boatbuilding did an outstanding job on their most recent build of a 36' houseboat from a kit supplied by Devlinkits! We think this is a very cool design and would love to see another. Contact Jeff Meeks if you'd like us to create a kit for you!

To my mind, the Candlefish 16 is probably the best open utility skiff around. Two variants are available, the bridgedeck version (which provides dry locking storage) or the more open version with side seats and unobstructed access fore and aft. The Devlin shop recently built one for Chip Hanauer, which he uses in Puget Sound and Lake Washington. Equipped with a 60 hp motor (which probably isn't recommended for any boater who isn't Chip Hanauer) the estimated top speed is pushing 40 mph. 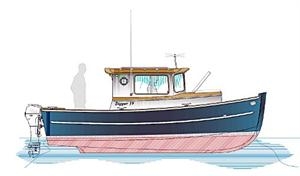 The Devlin catalog has such wonderful options, that I'm sometimes surprised at which models become favorites. This summer, the Dipper 19 has been a very popular choice, and in taking a second look, it become apparent why.

Featured kit for March, the Pelicano 18

To me, the Pelicano 18 is a perfectly sized kit for the independent boatbuilder. It's big enough to be used by the whole family on weekends, while small enough that a conscientious builder can get it done in a reasonable timeframe and store it in your garage. Many examples of this boat have been built since it's initial design in 2010, and after a recent update to the beam, the hull has even more load carrying ability and confidence-inspiring stability.

Equip it with up to a 90hp outboard for speeds approaching 40mph, or a smaller powerplant for maximum range and as little as 1gph fuel economy.

Welcome to our new e-commerce kits website! The site is intended to be an introduction to Devlin Boat Kits and a companion to our main website at http://www.devlinboat.com

The cart is empty